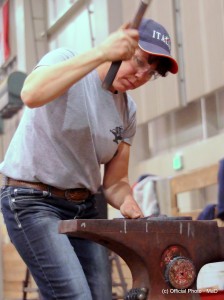 Jennifer DePollo Horn was interviewed for the  Farrier Focus Podcast. It’s a very informative and interesting interview. Jennifer answers questions about her career as both a Farrier and Blacksmith.

This is only an audio podcast, there is no video. It’s enjoyable, take time to listen!

click text below to go to the podcast page where  you can play;

Wikipedia describes Limoncello  as an Italian lemon liqueur mainly produced in Southern Italy, especially in the region around the Gulf of Naples, the Sorrentine Peninsula and the coast of Amalfi, and islands of Procida, Ischia, and Capri. It is also produced in Abruzzo, Basilicata, Apulia, Sicily, Sardinia, Menton in France, and the Maltese island of Gozo. In northern Italy, the liqueur is often referred to instead as limoncino. It is also a popular homemade liqueur, with various recipes available online and in print.

Although there is debate about the exact origin of the drink, it is at least one hundred years old.

Old Man Forge engaged in a Lemoncello (our own Americanized name for the liqueur) Challenge. The challenge began when Son of Old Man Forge displayed a jar with the beginnings of a batch that he had started. When I got home I decided to try my hand at home-made ‘Lemoncello’.  I texted a picture of my new batch and suggested a challenge between us. Who’s batch would be judged best in a blind taste test by a panel of impartial judges.

Today we met and put our bottled batches to the test. Several individuals (impartial judges) were given the opportunity to try the unmarked samples from the two versions. The liqueur had been refrigerated as that is the proper way to serve ‘Lemoncello’.

Small liqueur glasses were placed to the right side and the left side of the table, each with a sample from the two versions. After tasting the testers were asked to not say anything out loud, but then to mark their preference on a sheet of paper. The marked paper was hidden from view until each ‘judge’ made their decision.  Some had to try the samples more than once claiming they needed to do so for better evaluation!

When the results came in the vote tally said that the batch at the left had won. The truth is that both were so close to each other that the main difference was the strength of the alcohol content.  However, as they say on the popular program “Forged in Fire”, there can only be one Champion. The “Lemoncello” liqueur from Old Man Forge is the Champion.

As previously said, the big difference was the strength (proof) of the alcohol content. Old Man Forge is also a fan of the program “Moonshiners”  and thus learned that most moonshiners ‘temper’ their whiskey to ‘proof it down’ for drink-ability. The ‘tempering’ is done by adding some water to the initial batch. It results in a lower proof that will be more palatable for most people. Old Man Forge tempered his ‘Lemoncello’, otherwise the results were virtually so close in flavor that the challenge could be considered a ‘draw’.

Old Man Forge also produced some ‘Cranberrycello’. A special liqueur mix made from dried cranberries and the alcohol base. Finally there was sampling of ‘Mountain Madness’, a distillation with a hint of mellow peach flavor. It came from a Still hidden in the deep woods of some mountain in West Virginia.

All was fun and no one got hurt in the testing of these products.

Mom passed away one year ago today. It was just about this hour of the day, 2 pm, when I got her call to come because something was very wrong. It began a very sad event in my life. The first sign of distress and worry seemed to lift when we saw her in the ER at the local hospital and she had comments that made us all laugh. When the doctor said he wanted her to be taken to the U of M hospital for further care and evaluation we all thought it routine. We expected her to spend a night then go home the next day.

I rode in the ambulance with her as she was transported to U of M in Ann Arbor.  When, as we were only two or three miles from the hospital, the flashing lights and siren came on I became worried again.  Mom looked at me as they unloaded her from the ambulance and I told her we had arrived and they would take care of her. In seconds we were in the ER and a team of doctors and nurses began their tasks. Mom was failing and again looked at me as she slowly closed her eyes. My heart sank and I feared the worst. Hours later, 10:20 pm, with many of her children at her side, Mom did go home… home to Heaven and eternal life in the presence of God.

I have thought of her every day since. I will always think of Mom with Love in my Heart for the woman who sacrificed so much for all her family. She was a simple woman but taught us so much. She always had good to say and encouraged each of us in whatever our endeavors would be.

Today I will take a flower to her, say hello and tell her once again “Mom I love you”

A State of Mind